I’ve traveled a good bit over the years touching down in places like Southern Africa, Malaysia, Thailand, Hong Kong, China, Japan, Europe, Mexico and the Caribbean and now it appears that I will have the pleasure of visiting India and Sri Lanka. I am thrilled!

Having been invited by Pearl Dexter, Editor of Tea. A Magazine to join her and 6 others for a private tour of the tea estates and gardens in both countries, I must say the excitement is hard to contain. Those participating in this wonderful tour include: Pearl Dexter; Cynthia Gold, Tea Sommelier, Boston Park Plaza Hotel; her husband Julian; Danielle Beaudette, Owner/The Cozy Tea Cart; Judy Larkin, The Larkin Tea Company; Carol Sims, Tea Embassy; her husband Bob; and myself.

I am so looking forward to exploring the estates in Sri Lanka and the  Nilgiri region of Southern India.Though the idea of a 24 hour flight out of JFK less then thrills me, I’ve no doubt what awaits will be magical. I can’t wait to sip of cup of freshly produced tea!

Our group will leave the US on April 16th and return on the 25th. My hope is to blog, twitter and facebook while I am there, but that will require the leap over to AT&T and the wonderful iPhone. I cant wait!

I hope to bring back a ton of stories along with a fresh crop of teas from both countries! Below is a bit of info on both regions: 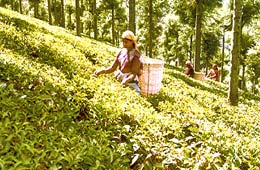 Sri Lanka: Ceylon tea from Sri Lanka, is considered the best tea in the world. The influence of climatic conditions of its plantation imparts to the product a variety of flavors and aromas, synonymous with quality. Why is Ceylon Tea considered unique? The diversity in flavor – something that other tea producing countries do not have. Teais = grown in six agro climatic regions, each region giving its own flavor profile to the tea grown in it. There are six regions for tea in Sri Lanka: Uva, Nuwara eliya, Udapussellawa, Kandy, Dimbulla and Ruhuna. The tea sectosr in Sri Lanka have always been a vital component of her economy. It is also the country’s largest employer providing employment both directly and indirectly to over one million people. It also contributes a significant amount to Government revenue and to the gross domestic product.